Home » Posts » Sicilian Pizza: Everything You Need to Know
Posts

Sicilian Pizza: Everything You Need to Know

Sicilian pizza, also known as sfincione, is a thick and hearty pizza native to the island of Sicily. It has become increasingly popular in recent years, with many people across the world enjoying its unique blend of flavors and textures. The history of Sicilian pizza can be traced back to ancient times, when the island was a crossroads for various cultures and cuisines. Today, Sicilian pizza is known for its thick crust, rich toppings, and bold flavors, making it a favorite among pizza lovers everywhere.

In Sicily, pizza and sfincione were popular by the mid-19th century. It is likely that sfincione evolved from the much older focaccia, a type of flatbread.

Over time, the recipe for this flatbread was adapted to include local ingredients such as tomatoes and anchovies, resulting in the delicious, hearty pizza that we know today.

Sicilian pizza remained a popular dish in Sicily and other parts of Italy, but it wasn’t until after World War II that it really began to gain popularity in the United States. Returning soldiers who had been stationed in Italy clamored for the taste of pizza, Sicilian or otherwise, in cities like New York, Boston, and Detroit. This sparked a culinary trend, and soon Sicilian pizza could be found in Italian restaurants all across the country.

One interesting aspect of the history of Sicilian pizza is the role that Italian bakeries played in its development. The addition of mozzarella to the pizza was most likely due to the fact that Italian bakeries in the US had an excess of this type of cheese. By adding mozzarella to their pizzas, bakers were able to use up their surplus and create a more flavorful and satisfying dish. Today, this delicious and unique type of pizza is enjoyed by foodies and pizza lovers alike.

If you’re curious to learn more about the fascinating origins of pizza, my blog post covers the history of pizza in great detail.

Sicilian pizza is incredibly popular and has become a staple in Italian cuisine. Its thick, square-shaped crust and savory toppings have made it a favorite among pizza lovers all over the world. In fact, it is often considered to be one of the most delicious and satisfying types of pizza available.

But Sicilian pizza is more than just a tasty meal – it is also a symbol of Sicilian heritage and identity. The origins of this type of pizza can be traced back to the Middle Ages, when Sicilian peasants would bake their bread in large, round trays. Over time, these trays evolved into the rectangular, thick-crusted pizzas that we know and love today.

Sicilian pizza has become a cultural touchstone for the people of Sicily, representing their rich history and culinary traditions. It is a source of pride for many Sicilians, who take great care and attention to detail in the preparation of their pizza. In fact, many traditional Sicilian pizzerias still use the same methods and ingredients that were used centuries ago.

Overall, Sicilian pizza is a delicious and culturally significant dish that continues to be enjoyed by people all over the world. Its popularity and cultural significance make it an important part of Italian cuisine and Sicilian heritage.

What Makes the Sicilian Pizza Unique? 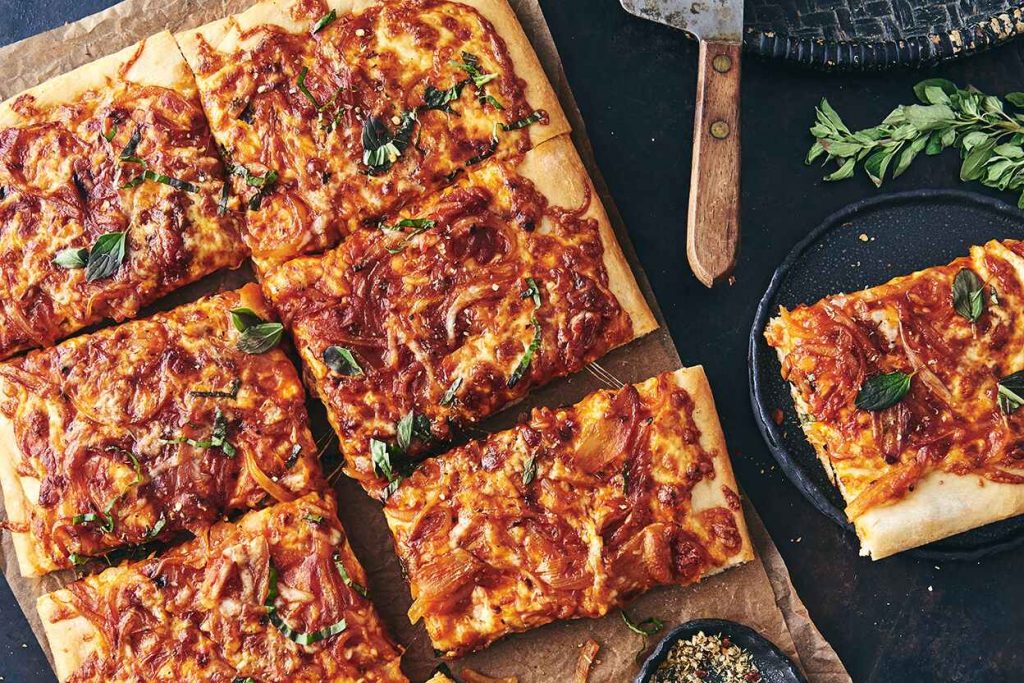 One of the most unique characteristics of Sicilian pizza is its thick, chewy crust and square shape. Unlike the thin, crispy crust of traditional round pizza, Sicilian pizza has a thick, chewy crust that is typically about an inch thick. This hearty crust provides the perfect foundation for the pizza’s savory toppings and allows for a more satisfying and filling meal. In addition to its thick crust, Sicilian pizza is also distinguished by its square shape. This unique shape makes it easy to slice the pizza into small, bite-sized pieces, making it perfect for sharing or enjoying as a snack.

Variations of the Sicilian Pizza

There are many ways you can achieve variations of the sicilian pizza. One way is by adding additional toppings such as olives, artichoke hearts, mushrooms, and even shrimp. You can also mix up the cheese by using a combination of mozzarella, provolone, and/or ricotta.

One popular variation of Sicilian pizza is the addition of different toppings. While the traditional version of the pizza often includes toppings such as olives, onions, and anchovies, many people enjoy adding a wider range of ingredients to their pizza. Some common additions to Sicilian pizza include mushrooms, bell peppers, sausage, and even pineapple. These toppings add extra flavor and texture to the dish, making it even more satisfying and delicious.

Another variation of Sicilian pizza is the use of different types of cheese. While the traditional version of the pizza often uses mozzarella cheese, many people enjoy experimenting with different types of cheese. Some popular choices for Sicilian pizza include Parmesan, gorgonzola, and even feta. These cheeses add unique flavors and textures to the dish, making it even more interesting and delicious.

How to Make Sicilian Pizza at Home 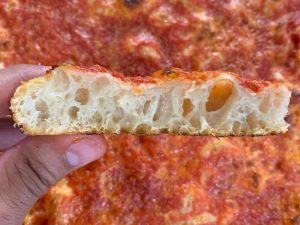 Final Thoughts on the Sicilian Pizza

Learning about Sicilian pizza has been an enlightening experience, offering a delicious and unique take on the beloved dish. It stands out for its signature thick, rectangular shape as well as its emphasis on fresh, simple ingredients. Not only is Sicilian pizza incredibly tasty, but it also has a rich history that is sure to capture your attention.

I would highly encourage anyone reading this to try their hand at making Sicilian pizza at home or to seek out authentic Sicilian pizza in their area to fully experience its flavors and characteristics. Overall, Sicilian pizza is a must-try for anyone looking to expand their pizza-tasting horizons.