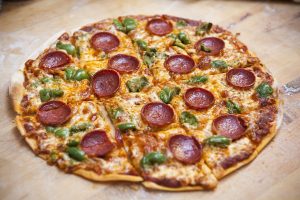 When it comes to pizza, there are two very distinct camps: those who prefer square cut pizza, and those who prefer the more traditional triangle-cut pizza. Each side is convinced that their way is the best way, and they are unwilling to budge. The debate can get remarkably heated, with each side making impassioned arguments in support of their preferred method of slicing.

Those who prefer square cut pizza argue that it is easier to eat and less messy than its triangle-shaped counterpart. They also contend that each slice is equal in size and includes the perfect ratio of crust to topping. However, fans of triangle cut pizza say that the shape allows for more surface area to be covered with toppings, resulting in a tastier slice.

While I have been a triangle-cut pizza eater for most of my life, I have recently begun to appreciate square cut pizza and I’m starting to share the sentiment of those who make a case for it.

In this blog post, I’ll discuss everything you need to know about square cut pizza and if you’re ready to try it out, then this post will guide you on how to cut your round or rectangular pizzas into perfect square cuts.

What is Square Cut Pizza?

Square cut pizza is simply your regular pizza only that it is cut into square cuts. It is usually baked in a rectangular pan but sometimes could be baked in a round pan; generally, all square cut pizzas are characterized by it being cut in square cuts. It is popularly called ‘party crust’, which is known for its unique shape and taste. It contains all of the same ingredients and recipes as traditional pizza, but because it has corners instead of rounded edges, it makes for a more interesting and fun eating experience.

Square cut pizza is a convenient alternative to traditional triangular pizza slices. Instead of being cut into long strips, they are cut into smaller squares, which makes them easier to eat. The unique shape of the square pieces allows for more toppings per slice and makes the entire pie even more appealing and delicious. It is more convenient for some people who have issues eating traditional triangular pizza because the square cut means no radical angles or floppy crusts as they bite in.

If you’ve ever been to Chicago, you know that their thin crust pizzas are always cut in squares. This tradition originated from the south side of Chicago, where tavern owners found it easier to serve customers with a square crust. Rose Barraco George, third-generation owner of the Vito and Nick’s restaurant says that square cut was more convenient for customers at the bar who were drinking beer while eating pizza. 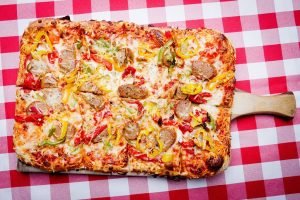 Traditional pizzas are great and are what most people have become used to over time. But these days people (like me) are starting to see why the square cut pizza might just be a great and maybe even better alternative to traditional pizza.

It’s easier to eat without making a mess. It’s also easier to eat a little at a time and it’s perfect for large gatherings. Ultimately, despite being unconventional, it looks amazing!

Eat Without Making a Mess

When you’re eating traditional round pizzas, you have to use your hands to get the whole thing in your mouth at once. That means that if you’re doing this while watching TV or something else that requires concentration, you’ll probably be distracted by trying to prevent the pizza from flopping over. With square cut pizza, all you need to do is pick up one side of the slice at a time and eat it like any other food item—no messy hands required!

Eat a Little at a Time

Another advantage of square cut pizza is that it’s perfect for snacking and you can ration your eating based on how hungry you are. Because of the nature of square cut pizza, the pizza slices tend to differ in size. If you just want to have a taste, grab a small square cut and see how you feel. Still hungry? Grab another! It’s very easy to control how much pizza you eat when you are enjoying a little at a time.

They can be a better option for large gatherings, including parties or any other social events. It can yield more pieces, unlike triangular cuts which make it perfect for sharing with plenty of people. Eating just half a square cut pizza will go round for more people than half a traditional slice (and they both taste delicious). Plus, you get twice as many slices per slice. Just cut it into small squares and everyone can grab a piece. So if you want to switch things up this weekend, give square–cut pizza a try.

It Looks Good! You Can’t Deny It

They look much different from the triangular cut, which makes them more appetizing for customers who want something different from what they’re used to seeing on their plates. If you love portable snacks that you can pick neatly and even share with friends without worrying about them taking everything at once, then you’d love square cut pizza.

How to Cut a Pizza into Squares 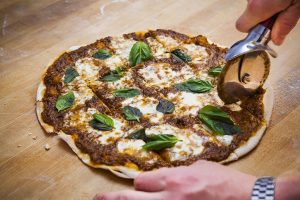 Cutting a pizza into squares is a great way to serve a large group of people. It’s also a fun way to make sure your food look as good as it tastes. All it takes to have a perfect square cut pizza is a pizza board, a pizza cutter, and your tasty pizza (of course).

I’ll walk you through the process of cutting your pizza into square cuts.

How to Cut a Rectangular Pizza into 16 Square Pieces

If you want a smaller or larger number of slices, then you can cut it according to the number you need!

So next time you’re about to order a pizza or you’re about to slice your pizza at home and you’re tempted to opt for the usual, I hope this post has left enough of an impression on you to consider giving square cuts a try.

Do you prefer square cut pizza to traditional triangle cut pizza? Let me know in the comments!

How Many Slices Are in a 14-inch Pizza?

How Many Calories Does A Slice Of Pizza Have?