Home » Posts » The Fascinating History Of The Hawaiian Pizza: From Canada To The World
Posts 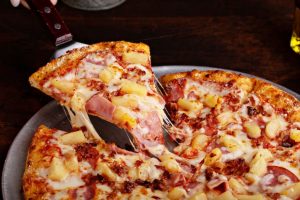 For many years, pizza has been a staple at get-togethers, family dinners, and as a late-night snack. It has gained popularity in many parts of the world and comes in various flavors, one of which is Hawaiian pizza.

Hawaiian pizza has long been a popular choice because of its distinctive flavor combination and capacity to satisfy both savory and sweet cravings. It is enjoyed by people of all ages and from all walks of life. Whether you like your Hawaiian pizza with extra cheese or extra pineapple, there’s no doubt that it is a delicious treat that everyone can enjoy.

Where Did Hawaiian Pizza Originate From? 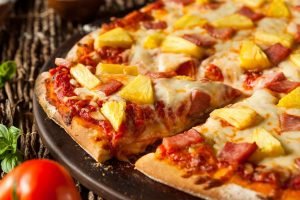 Pizza originated in Italy but the Hawaiian pizza has a different homeland. The dish was created in Canada by Sam Panopoulos, a Greek immigrant, in 1962. In Chatham, Ontario, he and his brothers established a restaurant called the Satellite Restaurant where he served simple traditional diner dishes such as burgers and pancakes. Later on, he decided to add pizza to the menu and began experimenting with various pizza toppings. His original plan for the Hawaiian pizza was to top a regular cheese pizza with ham and canned pineapple. The idea of putting fruit and meat on a pizza was initially met with some skepticism and criticism. However, the straightforward flavor combination proved to be an instant hit with customers, and the Hawaiian pizza quickly rose to the top of the pizza menu. He named the pizza after the canned pineapple brand initially used to test out this new pizza recipe. It is also believed that the growing Tiki culture served as the inspiration for the new pizza style.

The Hawaiian pizza quickly became popular across North America despite its unlikely Canadian origins and is now available in many pizza parlors and frozen food sections. It has gained so much popularity that it has even traveled to Europe, where many people who would never have imagined that a pizza with pineapple on top would be so delicious, now enjoy it.

What’s Special About The Hawaiian Pizza?

The Hawaiian pizza is a unique and delicious twist to the classic pizza that we all know and love. You wouldn’t want to miss out on this delicious culinary experience of bacon, ham, and cheese topped with sweet and tangy pineapple. It has a tropical appearance, which makes it distinctive. Although the topping pairing may seem odd, it works really well. A delicious pizza is made by combining the saltiness of the ham and the sweetness of the pineapple.

The combination of these flavors is truly something special and has made Hawaiian pizza a favorite among pizza lovers around the world. If you’ve never tried Hawaiian pizza before, you’re missing out on one of the most delicious pizzas you’ll ever eat!

How To Make A Hawaiian Pizza 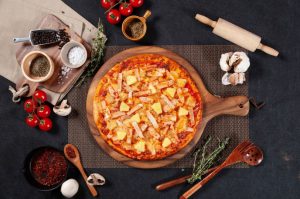 Making Hawaiian pizza is a simple process that only needs a few, readily available ingredients, which is one of its amazing features.

To make the Hawaiian pizza dough, these listed ingredients are essential:

-Lukewarm water (for a smooth and soft dough)

For the toppings, you will need:

-One large pineapple (peeled and cut into small chunks)

You can shop the Hawaiian pizza recipe at King Arthur Baking

There are other options besides the widely used Hawaiian pizza toppings for your pizza crust. If you’ve already tried this recipe and want to try some new flavors, other topping options you can explore with pineapple include jalapenos, bacon, sausage, and pepperoni. Just like Panopoulos, you can try out other unexplored options, as well.

Hawaiian pizza is not only delicious, but it is also nutritious. A lot of people think that because pizza has cheese on it, it must be bad for you. However, this is not the case. Pizza can actually be quite healthy if you make sure to get one with plenty of vegetables on it. The Hawaiian pizza is a great option for those looking for a nutritious meal. The ham and pineapple provide your body with protein and fiber, while the vegetables give you important vitamins and minerals. So, not only is Hawaiian pizza delicious, but it is also good for you!

How To Keep Hawaiian Pizza from Getting Soggy

One of the perks of this tropical-themed pizza is that it can get soggy because of the juice in the pineapple. Apart from sautéing the pineapple before baking, make sure the pineapple is one of the last toppings added to the pizza before baking to ensure that the pizza does not become overly saturated with moisture. You can also use a less juicy pineapple and cook the pizza at a higher temperature for a longer period of time, so the juice evaporates and the toppings are cooked thoroughly. This will require you to check it frequently so that your pizza doesn’t burn.

Concerning Hawaiian pizza, we can draw a few conclusions. First of all, it is a delicious and well-known dish with Canadian roots. Second, it has spread throughout the world and is now a phenomenon that people of all cultures can enjoy. Thirdly, it is unquestionably here to stay! You won’t be let down if you try this unusual pizza the next time you’re in the mood for something sweet, savory, and tropical.